The Challenges of Development Economics: An Interview with the Blum Center’s Kweku Opoku-Agyemang

The Challenges of Development Economics: An Interview with the Blum Center’s Kweku Opoku-Agyemang 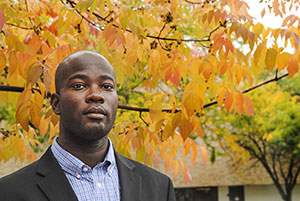 Kweku Opoku-Agyemang, a postdoctoral fellow at the Blum Center, believes that one of the greatest downfalls in the field of international development is detachment.

“Training in development is often solution-oriented. It involves implementing projects,” the 34-year-old Ghanaian said. “This may be why it’s easy to be detached from people and places. But detachment can have bad outcomes

Opoku-Agyemang has been subtly underscoring this point in his UC Berkeley course, “Poverty, Technology, and Development.” During a recent lecture, he told students the case of the Lake Turkana fish processing plant, a $22 million project designed in 1971 by the Norwegian government to provide jobs to the Turkana people of Kenya. The idea was to get the Turkana to run a fish processing plant for export, but the Turkana are nomads with no history of fishing or eating fish. Furthermore, the plant operated for only a few days, because running the freezers and providing them clean water in Kenya’s northwest desert were just too costly.

The field of international development is strewn with such stories of ineffectiveness or, to use Opoku-Agyemang’s word, “detachment,” in all its cultural, psychological, sociological, and historical variations. “About half of World Bank projects fail, costing billions of dollars,” he reminded his students—before launching into the larger question of the course and his current research: whether the current wave of technological advancement can alleviate global poverty.

“That’s an ongoing discussion,” said Opoku-Agyemang. He is measured in his opinions, perhaps from a decade-plus of education and research, in which he earned a doctorate in Development Studies from the University of Wisconsin-Madison, an M.A. in Economics from Ohio University, and a B.A. in Geography from the University of Ghana. “It depends on the example. There is a lot of excitement about technology and development now, but I think it’s too early to tell how successful the results will be.”

Still, Opoku-Agyemang is not waiting on the sidelines to find out. He is among a new generation of international scholars using interdisciplinary approaches from political economy, development economics, behavioral economics, business economics, and applied econometrics to understand the effects of technological advances, particularly mobile banking and communications, on poverty alleviation. Already, he has designed several applied research projects that document, through both qualitative and quantitative methods, how best to both formulate and evaluate development projects.

According to one of his mentors, Jeremy D. Foltz, a professor of agriculture and applied economics at University of Wisconsin, Madison, Opoku-Agyemang’s doctoral thesis was a standout because it provided new insights into informal finance, particularly in savings and credit markets. Opoku-Agyemang’s thesis looked at Ghanaian susu collectors, who work out of marketplace kiosks and through whom rural earners without bank accounts deposit and access their own money. Susu collectors are one of the oldest financial groups in Africa. For a small fee, they will hold onto people’s money and enable savings. But Ghanaians who deposit money with susu collectors do not establish formal credit worthiness with banks, even though their savings rates can be relatively high. Opoku-Agyemang’s question was why—and, in turn, what does credit worthiness really mean?

In the summer 2010, he conducted a survey to explore how small entrepreneurs use susu collectors. Some made daily or twice daily deposits; others parted with their earnings twice-weekly, fortnightly, or monthly. What he found from collecting questionnaires from 400 clients confirmed a hunch: the more frequently a person deposited money with a susu collector, the higher that person’s credit score would be in traditional finance. Banks took note. Rural banks in the Central Region of Ghana even used Opoku-Agyemang’s credit worthiness measurements to expand their customer base.

“Kweku gained exceptional access to local bank officials in the Central Region of Ghana, where there is a banking sector project to scale up micro-lending and do mobile banking,” said Professor Foltz in an email. “In the space of one summer, he was able to collect the best most comprehensive dataset on susu banking in West Africa that I have seen.”

Opoku-Agyemang has been pleased to see the results of his research: More Ghanaian banks now work with susu collector unions to mobilize funds to their best clients. But he wonders whether some entrepreneurs’ savings rates will change as they enter the formal banking sector. “Working with a susu collector is very social,” he explained. “One of the shortcomings of formal banking is that it’s relatively impersonal.” In other words, there may be less motivation to save when you give your earnings to a machine as opposed to a person who can commend your will power to save rather than spend.

Opoku-Agyemang’s current research is looking at the role of mobile technologies in Ghanaian activism and political reforms. He explains that a decade following the reforms of the 1990s, which led to new constitution and a multiparty system, Ghanaians’ confidence in local government has dipped—in spite of a robust national democracy. Especially in rural areas, many Ghanaians are politically disengaged. District and town meetings are badly attended. Even the strong Ghanaian tradition of using radio shows as means for citizens to complain directly to elected politicians, seems to have waned. “People used to line up around the block to call into the radio shows. It was a very influential way to be heard and make change,” Opoku-Agyemang said.

His current study, like his previous one, is based on a hunch: people will become more informed and politically active if they have an easy mechanism to voice their opinions—particularly to those in power. To test this, he designed a field experiment in five languages for Ghana’s Central Region that randomly varies access to politically participatory radio shows and enables more call-ins through mobiles and voice messages. Opoku-Agyemang plans to see if those who call in more often are more likely to vote in local elections.

Opoku-Agyemang, who grew up in the historic trade city of Cape Coast, does not think he necessarily has an advantage being a Ghanaian studying Ghanaian and African development issues. “I am only one person,” he said. “I tend to be very hesitant if someone is generalizing about a people or a situation. Ghana is a nation of 25 million people.”

Opoku-Agyemang explains his break from the family business in a matter of fact way “Mathematics is a language, too,” he said. But he admits that economics has appealed to him “because it tries to provide solutions. It provides me with a way to think about poverty as lived experience and as a public policy problem.”

Opoku-Agyemang said the experience that confirmed his interest in political economics occurred after he graduated from college. In Ghana, all public university graduates are required to spend a year working for the government. Opoku-Agyemang got assigned to the HIV/AIDS Secretariat and to a project aimed at lowering infection rates. Although there was public awareness of the disease, by 2005-2006 rates were rising. One of the results was that Ghanaians with HIV dropped out of basic school. The HIV/AIDS Secretariat decided the best approach would be reinvigorate the curriculum and set out to work with the Teacher’s Union. They decided that to reach students, all taboos should be on the table for discussion.

The creation of the teaching guide took six months of continual student-teacher workshops and a year before a final document was published. “The experience put me in touch with basic technology adoption—understanding how many iterations and modifications are required and how long it takes,” said Opoku-Agyemang. The experience also led to results. HIV infection rates fell from 3.6 in 2003 to 2.2 by 2008, and in 2013 only 1.3 percent of the Ghanaian population had contracted the disease. “I think it would have been very easy to quickly write up a teaching guide, give it to teachers, and be done with it,” Opoku-Agyemang said of the project’s success. “Instead, we realized that there needed to be as frank discussion as possible, that teachers and students would have to make themselves vulnerable.” In other words: no detachment.

Development experts around the world are now using psychological insights to inform social and economic policies—sometimes with results like one Opoku-Agyemang experienced at Ghana’s HIV/AIDS Secretariat. “Behavioral economics has become popular because in the past economists had a limited view of how people acted,” he said. “There wasn’t enough attention paid to basic human behavior, to procrastination and forgetfulness. What I like about behavioral economics is that what looks common sense is only proved after the fact. Common sense before a rigorous study is actually not so clear to pinpoint.”

UC Berkeley Professor Ananya Roy, who serves at the Blum Center’s education director, views Opoku-Agyemang’s work as part of an interesting moment in development studies and especially development economics. “On the one hand, there is great interest in specific methodologies such as RCTs [randomized control trials], as well as in the technologies that can be used to perfect such methodological approaches,” she said in an email. “On the other hand, economics is returning to broad questions of political economy, tackling the puzzles of capitalism and persistent poverty and inequality. What is inspiring about Kweku is how comfortably he inhabits both worlds. He thinks like a political economist, recognizing the need to have a global, historical, and critical understanding of development. But he is able to act alongside the practitioners of development economics and the advocates of poverty action. In this sense, Kweku represents the best aspects of the amalgam of approaches and worldviews that make up the academic programs of the Blum Center, notably the Global Poverty & Practice Minor and the Designated Emphasis in Development Engineering.”

The Blum Center Postdoctoral Fellowship is supported by the Development Impact Lab at UC Berkeley in partnership with USAID. The fellowship aims to support research and teaching in a wide range of interdisciplinary fields and on a variety of subject areas relevant to poverty, inequality, and poverty action.