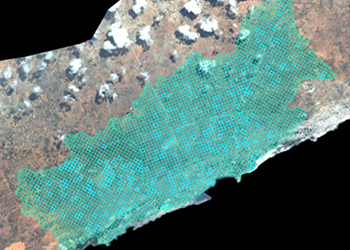 This project demonstrates the potential of using long-distance internet-enabled data collection methods as a supplement to follow-up surveys on the ground. This is particularly important in post-conflict and conflict settings, such as the study’s Mogadishu location, where in-person follow up can prove particularly problematic.

In Spring 2012, the study team conducted the first representative survey in Mogadishu – population of 1.03 million inhabitants – in 25 years, using emergent technologies to achieve an unbiased and representative sample of Mogadishu’s residents. A commercial satellite photograph of Mogadishu was used to create its sampling frame, with habitable structures coded pixel by pixel. The survey team was deployed using smartphone technology, pre-loaded with maps to guide them from location to location. The survey solicited phone numbers from respondents at the end of the survey, to establish a “virtual sample.”

In 2013, the project utilized a Somali-Language phone bank, organized by the Somali Youth League of San Diego, to follow-up on the initial data collection project. The study demonstrates that follow-up surveys via mobile phones can be pursued remotely by researchers and practitioners in near-real time, ensuring more effective iteration between evaluation and other phases of the development pipeline.

This initial phase of the project was completed in 2013, demonstrating that cellphone numbers can be used to remote follow up with respondents in Mogadishu, a conflict zone, many months after initial surveys. Of the 781 individuals initially selected for the initial household survey, 11% (85 people) could be followed up with via cell phone sixteen months later. The resilience of this cell phone network has important implications for low-cost follow-up data collection methods, particularly in conflict and post-conflict areas.