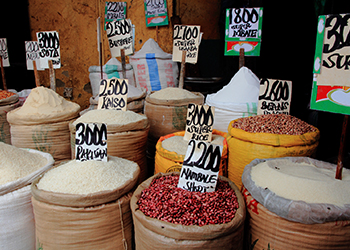 The improvement in agricultural productivity in sub-Saharan Africa is one of the most important welfare questions of the upcoming century, with Africa’s population projected by the UN to quadruple over the next 90 years. This project aims to test the effects of shallow markets on agricultural productivity in Africa, generating data on the relationship between prices and quantities of basic agricultural commodities flowing through rural markets. The project will develop a mobile-phone based survey tool and deploy it throughout Uganda. Market traders (who are well-informed as to local prices and quantities) are provided with smart phones and sent short surveys at frequent intervals on local prices and quantities of agricultural goods. The incoming data from the traders will populate a dashboard system that will be eventually be made public to traders nationally. The possibility of running the entire survey system via mobile phone creates a truly new capability to field a survey that is adaptable, fine-grained and relatively inexpensive.

With a detailed market survey in place, researchers will have a better ability to connect the effects of high- or low-yield seasons to price changes and thereby be able to understand the extent to which shallow markets are providing a disincentive for farmers to adopt yield-enhancing technologies. This type of high-resolution data is critical both to diagnosing the underlying problems with markets that effect incentives for farmers in remote and isolated agricultural markets, as well as to point us to the programs that are likely to produce durable changes in food output for the world’s poorest region. The public dashboard will also provide a critical famine early-warning system for government and NGOs by indicating the specific times and places in which basic cereal prices were spiking.