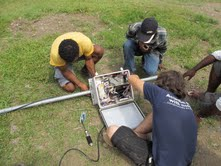 Today over one billion people worldwide live beyond the reach of cellular networks. Many live in sparsely populated rural regions, with weak power infrastructure– making it prohibitively expensive for most telecommunication companies to invest. Living outside the network means lack of access to important services like emergency communications, market price information, and job opportunities.

To address this challenge, researchers supported by the Development Impact Lab (DIL) at UC Berkeley have developed the Community Cellular Network (CCN), formerly known as the Village Base Station. The CCN is a complete “network-in-a-box”, enabling local communities to both own and operate their own cellular systems. The network is designed for the world’s most remote communities and can be deployed by people with limited technical skills. At its core is a village base station, or cell phone tower. Each CCN is costs less than 1/10th the price of traditional cellular equipment, and its low power consumption enables it run solely on solar or micro-hydro power. It is also highly efficient, using less than 50W average power draw, which reduces infrastructure and operating costs. The network can provide kilometers of coverage to local communities.

In order to better understand usage patterns, the Center for Effective Global Action (CEGA) is currently evaluating a deployment of the technology in rural Indonesia. This evaluation will map the demand for mobile telephony and associated applications as well as the technology’s impact on local business activity, educational outcomes, and community norms. The CCN design team will work closely with CEGA to understand and integrate these findings in an iterative technology design process for maximum impact.

The engineering team has adapted the core technology (radio antenna, admin interface) to the Philippine context and added functionality to the Community Cellular Network towers to make it possible to target promotions to individuals and households.The team also successfully installed a CCN in the Philippine province of Rizal, and the tower has been running successfully since January 2016. Most recently, the team developed a Tagalog survey instrument through extensive focus groups and piloting, and as of mid-September 2016, 1,500 households have been surveyed. As a result of these efforts, the team has been able to negotiate a commercial agreement with the national telecommunication operator Globe that allows us to provide price subsidies to individual subscribers, and Globe has made a verbal commitment to provide a spectrum license as well as to support our efforts to obtain other required regulatory permits.