“We’ve done the research, we’ve done the invention, we’ve filed the patents, we’ve done field testing, and we’ve shown that it works. Now we need help to make sure it goes into the hands of the private sector so it can scale up.”
—Ashok Gadgil, Principal Investigator, UC Berkeley 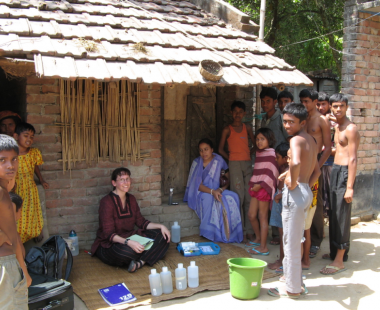 Since the early 1970s tens of millions of  shallow tube wells have been installed in Bangladesh and India, resulting in a vast yet silent disaster: these wells draw from arsenic-contaminated aquifers. Recent studies report that up to 20% of all adult deaths in Bangladesh are now arsenic-related.
Berkeley researchers have developed a technology, ElectroChemical Arsenic Remediation (ECAR), that robustly, reliably, and affordably produces arsenic-safe water within a sustainable and scalable business model. ECAR uses an innovative method: a small electric charge creates rust particles from ordinary steel plates which bind to arsenic, allowing for effective filtration. The technology is designed to be robust and low-maintenance enough to work in deep rural areas with almost no tech backup or support.

ECAR’s research is not only exciting for the scientific expertise and innovation which has gone into developing the technology, but also for the breadth of analyses which are contributing to its use and dissemination. A financially viable business model is crucial to ensure continued monitoring and maintenance of the technology, along with education and social marketing to encourage users to pay for added value in what has historically been a free (albeit contaminated) resource. ECAR researchers envision community-based treatment facilities operating in partnership with local schools and the private sector; they are currently undertaking rigorous economic analyses to design and evaluate innovative sustainable business models.

Progressively longer and larger scale prototype evaluation is being conducted in communities and schools in India (earlier trials focused on Bangladesh and Cambodia) through extended field trials, focusing on technical performance, business and entrepreneurship activities, and the social integration of ECAR. Specifically, two UC Berkeley graduates will be based in Kolkata for 6 months in 2016 to make improvements to the ECAR prototype, develop and implement real-time monitoring equipment, and collect performance data.

The ECAR demonstration plant has now demonstrated producing 10,000 Liters of water that meets regulatory standards for India (and also WHO and US EPA) for drinking water in all respects, including arsenic.  The plant has capacity of delivering 10,000 L per day.  The processed (outlet) water has arsenic concentration below detection limit (below 5 ppb). The arsenic concentrations have been measured at an NABL Lab in India, and also in parallel at Berkeley.

The team is continuing to support Luminous Water Technologies (the exclusive licensee of the ECAR in India and Bangladesh) on the development of the next ECAR installations and they are exploring sites in Bihar, Jharkhand, and Bangladesh.