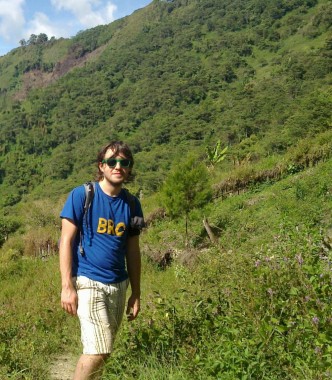 August 19, 2014 | When Kurtis Heimerl applied
for the PhD program in computer science at UC Berkeley, he didn’t intend to focus on technology for developing countries. But several experiences propelled him in that direction.

In Eagles River, Alaska, where he grew up, he said he “spent a lot of time in rural areas and saw how the lack of access to technology affected people’s lives, especially during emergencies.” Heimerl excelled early at math, and his parents urged him to pursue work and money at the big tech companies. So while an undergraduate at University of Washington, he interned at Google and Amazon. But he didn’t love the work.  “Computer programming is tedious,” said Heimerl. “That’s why companies like Google pay us so much.”

After graduation, Heimerl landed a job at Microsoft Research India, which took him to Lucknow, the capital of Uttar Pradesh in the summer of 2007. He said he went not for altruistic reasons, but because he wanted to see India. The project, called the Digital Study Hall, put him to work developing long-distance learning software for children in slums and rural schools. To Heimerl’s surprise, he said, it was “super fun. I saw the work was useful and I could help people.”

That fall when he matriculated at Cal, Heimerl went hunting for people doing technology for development. He soon found Computer Science Professor Eric Brewer, who runs a lab called TIER, short for Technology and Infrastructure for Emerging Regions, and managed to jump through the programming hoops Brewer presented him. “I came in with a strong technical background,” said Heimerl. “What I needed were stronger social science skills, ways to connect technological advancements to the needs of people.”

Heimerl related all this background from a small schoolhouse built by Dutch missionaries in the remote highlands of Papua, Indonesia, where he is monitoring the cellular network he installed last year for the area’s 1,500 residents—and where last week he received the news that MIT Technology Review named him one of the Innovators under 35 in the “Humanitarian” category.

Heimerl deserves the label. He is among a growing number of top-notch computer scientists and engineers who are turning away from the big money of technology companies to pursue humanitarian tech work—or what’s increasingly being called Development Engineering. Heimerl’s graduate and post-doctoral work has focused on how to provide cellular communications to some of the estimated 1 billion people worldwide who live outside the range of cellular carriers.

At its core, he explained, the challenge is not about technological innovation, but about how to apply existing and low-cost cellular network advancements to places with regulatory and economic barriers. The highland villages of Papua are just too remote and the people too few and poor for a big phone company to have interest. As Heimerl and his UC Berkeley colleagues explain in a recent paper, the GSM (Global System for Mobile Communications) network may be the largest communications network on earth, but it is full of “whitespaces”: places off the grid and without cellular coverage, which limit people’s economic advancement and quality of life.

To fill the whitespaces, Heimerl and his colleagues at TIER have created, with support from USAID’sDevelopment Impact Lab and the Blum Center for Developing Economies, a GSM cellular tower that can be powered by sun or wind and that provides villagers with local calls, text messaging, and web surfing. The project, called Community Cellular Networks, is essentially an outdoor PC in a waterproof box that uses an open-source technology (called OpenBTS) to implement a GSM base station. Heimerl says it takes one to two people to set it up, and no one to maintain it. “You get a pole, run it up a big tree, rope the box into place, and it’s done,” said Heimerl.

But the community cellular network, which has been running in Papua for 18 months under the tacit approval of various government officials, is technically illegal. The reason? GSM uses licensed spectrum, and gaining access to licensed spectrum is nearly impossible for small, rural operators. “But shutting it down doesn’t help anyone, and no one is going to do it,” said Heimerl. Also, the revenue from this “pirating” is insignificant; what’s significant is the social benefit. Heimerl’s five-month-old social enterprise Endaga charges $0.09 per outbound SMS, $0.02 per minute for local calls, and $10 for a SIM card. It is making about $1,000 a month from a few hundred customers, and expects to break even on its $10,000 investment in a year. Verizon and AT&T are not calling.

Besides sitting in the school and monitoring the system, Heimerl said he deals with the network’s billing issues and interviews people about their cell phone experiences. One story from the local hospital is illustrative. For the latter part of the summer, the only two doctors went to Jayapura, the capital of Papua, leaving the nurses in charge. Starting in July, many villagers came down with a tropical disease. No one knew what to do. With Heimerl’s cellular network, nurses were able to reach the doctors using SMS to help with diagnosis and treatment. For the nurses—and the sick villagers—the savings in terms of travel costs and lost workdays were considerable.

“It’s exciting to build a system like this and to solve a problem,” said Heimerl, who also admits development work is not all travel and excitement. But Heimerl seems to take advantage of his boredom. When the power goes out, which happens from to 2 pm to 6 pm everyday in Papua, he plays basketball and mingles with the villagers, who often tell him how useful and life-altering it is to communicate with the outside world. “That’s what gets me up in the morning,” he said.

“There are so many things to love about Heimerl’s work in Indonesia,” said Professor Brewer of his student. “But my favorite is that he is delivering complex technology to rural users in a way they want and can control.”

This article was originally published on the Blum Center for Developing Economies’ website. You can view it here.