Electrification for “Under Grid” Households in Rural Kenya: Five Questions for Ken Lee

Electrification for “Under Grid” Households in Rural Kenya: Five Questions for Ken Lee 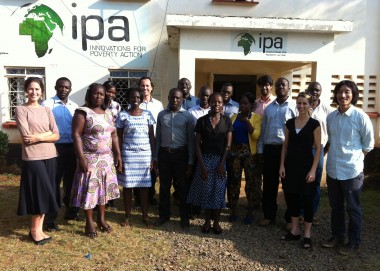 In the summer of 2012, an interdisciplinary research group at UC Berkeley set out to study the demand for and effects of community-level, solar-powered microgrids in Western Kenya. To the surprise of the members of the group—led by Professors Edward Miguel (Economics), Catherine Wolfram (Business), and Eric Brewer (Electrical Engineering and Computer Science)—they could not identify many communities that were truly “off grid.” There just always seemed to be an electricity line nearby.

As a result, the group shifted its focus to populations who were “under grid”—in other words, people whose homes and businesses were near but not directly connected to the grid network. In partnership with Innovations for Poverty Action, the research group began the time-consuming process of mapping out 150 communities in order to gauge each household’s relation to the grid. The census data quickly began to generate a lot of interest from local policymakers and led to the July 2014 working paper “Barriers to Electrification for ‘Under Grid’ Households in in Rural Kenya,” published by the National Bureau of Economic Research (NBER).

To make available the significant economics and engineering findings of the NBER paper, supported by UC Berkeley’s Development Impact Lab, the Center for Effective Global Action, and the Technology and Infrastructure for Emerging Regions, we asked lead author Ken Lee, a PhD student in Agricultural and Resource Economics, the following questions.

1. What is the main difference between “off grid” and “under grid” electricity connections, and what policy implications does this distinction have for African countries?

The International Energy Agency estimates that in Sub-Saharan Africa, 600 million people live without access to electricity. What follows quite naturally is an assumption that most of these people are “off grid”—or too far away to realistically connect to a national electricity network. As a result, we’ve seen growing support for off grid, distributed energy technologies, most of which are best suited for regions without access to grid power. Yet many countries are expanding the reach of their national grid infrastructure. In Kenya, for example, there has been a recent push to connect all of the country’s secondary schools, health clinics, and markets, suggesting that a large proportion of the population is now within walking distance of an electricity connection.

We are hoping to change the framework in which we view this problem. It is possible that a substantial portion of the 600 million people without electricity are not “off grid,” but are “under grid,” or close enough to connect to a low-voltage line at a relatively low cost, and this is what we illustrate in our research paper. This distinction is important because the policy implications for off grid and under grid communities are quite different. In under grid communities, it may be preferable to focus on supporting policies that will leverage existing infrastructure with the goal of increasing “last-mile” grid connectivity.

2. Your research showed that despite Kenya’s strong push for rural electrification, national electrification levels remain below 30 percent. What have been some of the biggest challenges in effectively connecting rural communities to power grids?

The most important barrier to grid connectivity has been the high price of an electricity connection. Currently, the price of a household connection is $410, which is incredibly expensive even by American standards. In a country where gross national income per capita is $1,730, this price is simply unaffordable for poor, rural households. There are several other barriers to electrification as well. For example, even if the price were lower, it may still be necessary to provide households with an option to finance their connections, so that they could pay back the principal amount over time. Finally, rural households in Kenya tend to be spread apart and there are few straight lines through which one could easily run a power line. This makes it challenging for electricity planners to build out cost-effective low voltage networks, particularly when they are unable to connect all of the neighboring households at the same time.

3. What effect does reducing energy poverty have on other aspects of development, such as income, well-being, and education?

There is no question that access to modern energy is a key input for economic development. For example, electricity opens up the possibility for households to extend their lighting hours, changing the way that people use their time, and allowing children to (hopefully) study later at night. It also allows households to engage in all kinds of new income-generating activities. In one of our study sites, we met a woman who had already begun selling cold fruit smoothies to her neighbors, within a month of gaining an electricity connection.

Given the high cost of rural electrification, there is a need to rigorously document the socioeconomic impacts of modern energy. There is also a need to better understand how newly connected households will consume energy moving forward. Our research team is currently implementing a randomized evaluation of grid connections in Western Kenya, and through this project, we hope to shed additional light on these questions.

4. What are the options available to poor rural Kenyan households to finance electricity installation and continued use?

Currently, the options available for households to finance installations and appliance purchases are limited. Although the national utility had offered a financing plan in the past, the program encountered many challenges. There is, however, high demand for financed energy solutions. The recent success of the “pay-as-you-go” solar home system offered by M-KOPA provides an interesting example. Households are paying as much as $200 over the course of a year to finance a limited solar home system product. What makes their financial model work is that the daily payments can be processed through the M-PESA mobile money platform. So while there is a general need for additional financing options for grid connections, the example illustrates that there is an equal need to develop innovative billing and collection technologies for financed grid connections that will incentivize both lenders and borrowers in a sustainable way.

5. How can governments in Africa design projects to improve national electrification levels?

Our study region in Western Kenya has high population density and extensive grid coverage, making it an ideal setting in which we would expect to observe rapid rural electrification. Yet the vast majority of the 15,000 rural households and businesses that we document remain unconnected despite being located within connecting distance of a power line. So the real issue is not the lack of an electricity supply, but the fact that both the price of a connection and the cost of supplying that connection is prohibitively high. It just doesn’t make sense for a utility to spend lots of money to connect a single household in a remote, rural community, even if the grid is physically present.

The most promising strategies for improving national electrification levels will vary from country to country. Wherever there is grid coverage, however, governments may wish to consider policies that will leverage existing infrastructure, while taking advantage of the economies of scale in supplying last-mile connections. Connecting multiple households at the same time would not only reduce transportation costs but also would allow utilities to plan local distribution networks that minimize costs. Coordinating these connections poses the collective action problem that would need to be solved through a government policy, such as a mass connection program. The idea of subsidizing last-mile electricity connections to households is, of course, nothing new. This is how many developed nations, including the United States, reached universal electrification.